Hi FAM! How’s March been treating you so far? Mine has been okay, can’t seem to catch a break though . I’ve been so busy,  plus I’m struggling with consistency on my blog. Lord help me lol!

Anyways, I’m here to discuss something I’ve been wanting to share for I while now but I haven’t  really found the time, but here I am now. I’d like to title this one ” Guy Logic – Girl Logic”.

A few weeks back, my friend was telling me about a guy she has been talking to for a while now, everything is going well, they’ve gone out a couple of times, they seem to be vibing but the guy hasn’t  really said anything about being official or asking her to be his girlfriend. At some point, it became quite frustrating because she didn’t really know where to place the guy in her life. She was at a point of asking him what they were , you know the kinda question you ask when you get with a guy. Though  we had to do a little rethinking about that lol, all thanks to her cousin who pointed out certain facts with I’m going to share later. 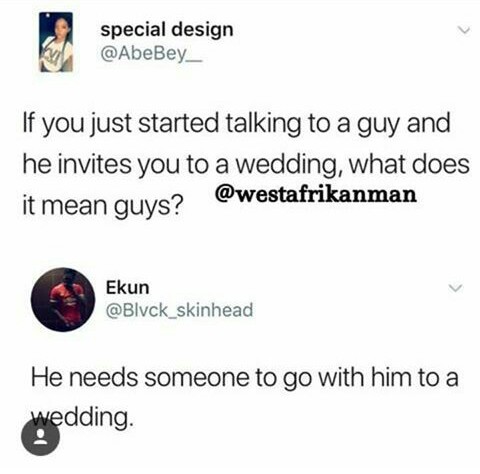 In this post, a lady is asking what it means for a guy to invite to you a wedding. There’s also a reply from a guy saying “He needs someone to go with him to a wedding”.

This just shows how very sensitive ladies can get. What might be just be a casual thing to the guy might be a very serious and sensitive thing to a lady with deep meanings attached.

As ladies, once we like a guy, we literally picture ourselves married to this person, with kids, in fact we could even pick out names for the kids all in our head lol. We could even do this for a mere crush, talk more someone we actually really like and communicate with. All this could happen even before the guy makes an official attempt to ask us out. This feelings or sensitivity makes us vulnerable to the guy and our emotions.

As for guys, they more of logical thinkers. They have emotions and feelings quite alright but they don’t just act based on that.

There are two categories of guys:

A. There are guys that meet you and like you but are not really certain about what they want from you yet. So, they want to take their time to watch and observe you before they make up their mind about wanting to move forward with you. This might actually take a while.

B. While they are guys who see you and just know deep down that you are the one and they push forward without relenting.

My friend’s cousin gave this example with lawyers; when lawyers go to C.A.C (Cooperative Affairs Commission) to file for documents, they are certain documents that involves verifying, then access (that is, how much it will cost you) then file.

Due to the fact that guys fall under this categories, ladies who meet guys under category A might have issues with them because category B is actually rare. These issues occur because most times we want something more and the guy might just like you and be cool with you just like that. This can be annoying for ladies sometimes because you end up falling for someone who just wants to be your friend.

So ladies, of you find yourself in such a situation, how do you tackle it without getting hurt?

1. Self Discipline; know who you are and what you want.

2. Set Rules; for instance,  when someone new comes into your life,  treat the person as a friend that be is.  Limited  and moderate  communication and commitment.  So you can know where the guy is heading instead of making assumptions,  also to avoid drama.

3. Do Not Limit Yourself; as far as he hasn’t officially said anything,  please and please do not limit yoursef to the guy.  Talk to other  people,  don’t channel all your energy and emotions to the guy. That could save you from some issues.

It all boils down to the same thing at the end of the day. Girls,  guys,  we are all sensitive  people. Sometimes  your out pour of emotions  might lead  to you being taken advantage  of,  and that my friends is really  really  bad.  To think that guys get put off by the  question  ” what are we? ” stills brings me to the point where there has  to  be a valid bases for this question  so you don’t end up putting pressure on yourself and someone  else.

How Do You Deal?

Why most Relationships Do Not Work Out(2)

Deespeakable Welcome to Deespeakable Blog meaning that Desewa isn’t afraid to say what is on her mind and share her experiences with others. All content: text and images were created and curated for this site and where not owned by the content creator, necessary credits are paid.